Apple to discontinue the iPod after 21 years... The end of the 20th century and the start of a new age. USB's are invented, giving us the first convenient way to transport and share data.

Previously the amount of songs you could 'bring with you' was limited. In 2001 Steve Jobs presented a 5GB device able to store 1000 songs.

As the technology age develops, security becomes more of a talking point. Unbreakable keys are created to ensure your data stays secure.

What started off as a communication platform for college students, then becomes the biggest social media platform, available to all.

The first web application to make full use of satellite imagery and aerial photography to provide a location / mapping service.

A way to store high definition video on to a disc. Allowing viewers to play games and watch their favourite films in a high - quality format.

This was a massive step forward in the way of cellular devices. Not only did it remove the requirement of a physical button keyboard, but featured GPRS and Edge support (data transfer).

A personal computer operating system replacing the previous Windows Vista. This new system was fresh, clean and much easier to use. Featuring internet explorer 8, media player and more.

Video games can now be played without a physical controller. Microsoft invent the 'body' controlled video game. Using cameras in a slimline free - standing device, placed under, or on your TV.

The virtual assistant that searches for answers and follows commands. The app adapts to the user's voice and language preferences, Making it the perfect portable PA.

Developed as a file storage and synchronisation service. You can now share information quickly and collaboratively edit. This develops further later on.

Released as a preview in 2014, people who previously used Windows 7 and 8 had the ability to upgrade for free. After some adjustment many then came to love the new upgrade.

Released with the iPhone X, your phone will unlock using your facial features. This technology follows touch ID, allowing biometric authentication to unlock your phone, make payments and track your expressions.

With AI developing at a fast rate, it is no wonder robots are too. Robots are programmed to complete further tasks. They now have longer periods of control and a higher level of understanding.

There are lots of new developments to keep an eye on. But the most notable are the further pushes into virtual and cloud based technologies.

We thought it might be a good idea to put together a list of technology perfect for employees working in this sector.

Dual screens are a must have for your desk. For people working with numbers, spreadsheets and calendars, 24” sized (and above) monitors are best. Height adjustable monitors are also a great idea. Sitting at a desk can really ruin your posture and cause lots of health issues.

Lots of companies try and be as paperless as possible. This is fantastic; however, it is found that lots of administrative tasks, still require a paper trail. Having a high-quality laser printer and copier is a good idea. Not only does it reduce ink wastage, is more economical to run, it prints at high speeds.

Administrative professionals generally do not require a very high specification machine. Generally, they have basic storage requirements, have low functioning software and use basic applications. Ensure you don’t pay extra for a high spec machine for job titles that don’t require it.

Notably one of the most annoying sounds is a keyboard tap and mouse click. This can cause high levels of stress and aggravation, especially for someone constantly using these accessories. Invest in a high -quality soundless keyboard and mouse.

Notably one of the most annoying sounds is a keyboard tap and mouse click. This can cause high levels of stress and aggravation, especially for someone constantly using these accessories. Invest in a high -quality soundless keyboard and mouse. 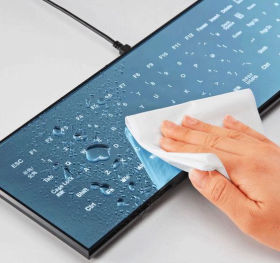 Using touch screen keyboards have become more familiar than your typical keyboard, due to the use of smartphones and tablet devices. There are many benefits that have aided the move to this technology: they are less noisy to type on, water resistant, shatter resistant (slamming the keyboard around is not advised), they look tech savvy and they are programmable to your requirements. 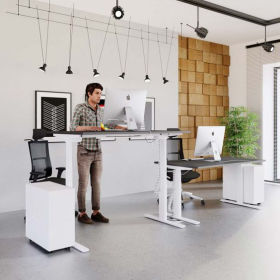 Not so much technology focused, but these have been a huge trend in offices for a while now. 'They have so many health benefits including: reducing back pain, lowering the risk of weight gain, improving your mood, increasing energy levels and can lower the risk of heart disease.' (Source: Teeter) They also look fantastic, especially if you like a minimalist work area. 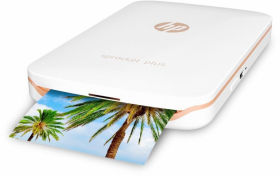 These have been huge, especially in creative industries.Those that rely heavily on social media seem to be investing. As a work tool it depends on how creative your role is. If you have imagery you need to prove, a portfolio to create or inspiration imagery projects, this is a great tool to represent your ideas. 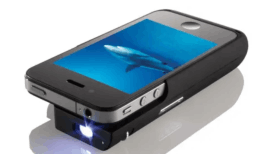 Definitely not an essential workplace tool, especially when we have a world full of connectivity. But to give presentations on the go, or to watch a video with a wider perspective (maybe with other co workers), this is pretty handy. You can simply plug in your smartphone or tablet and point it at a blank wall.

As much as technology might frustrate people, you cannot deny most of the time it does make life easier. Running ABM smoothly is a challenge. As with any business you have to wear many 'hats' and coordinate with lots people. To help with this process here are Anthony's top 3 gadget suggestions.

I know as a company we go on and on about the importance of monitors. But it does improve efficiency and it doesn't have to be an expensive change. I have three 27" Acer monitors all lined up, and it drastically improves my workflow.

There are other great phone options, but for me I find the iPhone seamless in the corporate world. The max is great because of it's big screen, this is always appreciated, not just for typing but for my eyesight as well.

This is essentially a tablet with an attachable keyboard. Because it is a
Microsoft device it has all of the functionality of my office - based PC. This is a really handy piece of kit. Designed solely for business people on the move.

With a variety of monitors available to the masses, ABM have used a fair few during our years in business (and of course as individuals). Watching how technology innovation has improved screen options, it is clear that curved screens are a popular choice for the business environment. But are they any good? 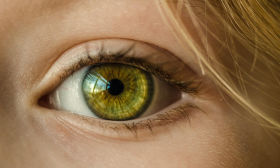 The deeper screen curve allows your eyes to follow motion fluidly on the screen, and therefore reduces strain on your eyes. 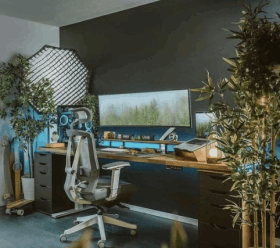 Allowing colours to be more vibrant and reduces light leakage to ensure black and white are more uniform. 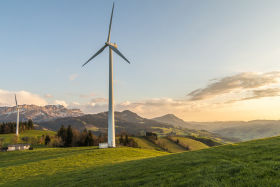 Allows instant screen adjustment depending on the luminescence of colour. You can also reduce brightness yourself. 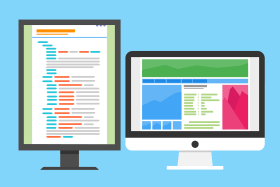 Having two by side is a popular choice as you can skip between tasks. HDMI, headphone and power port available.

When you are sat with the screen fully set up, and you adjust yourself perfectly in front of it, you can use your complete line of vision and peripherals to improve your work.

Amazing for occupations requiring lots of screen usage for design and colour work. The colours are vibrant and truly impressive.

When out of full screen in a window, some people find the curve distracting as it bends the view. More so than in full screen.

Less ports available than most people like to have, and the cost is still quite pricey compared to other high spec flat options.